Please, email at info@sherpasansar.com, if anyone is interested to publish their news, articles, issues, interviews & event 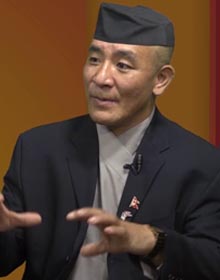 Ang Kami Sherpa is a social worker who presently lives in New York, USA and in Taiwan as well. He volunteered Sherpa Kyidug from 2005 – 2007 and from 2007 – 2011, he was one of the member of New York Gomba Committee and later on became life member of Sherpa Kyidug USA. He has experienced a very difficult life during his childhood. His father passed away when he was 9 and then his mother passed away one year after his father. He recalls that his mother was raped by the police and his uncle took all of their property. As he has already experience a very difficult life with ups and down. He is on the mission to help any people who can be helped. He has almost rescued around 70 women from foreign country like dubai, india, Syria,omen,Kuwait, etc who were sold by the broker agents.
He is originally from Okhaldhunga and without a proper education background. however, he learned English while he was in United Kingdom at English language institute. This opportunity to visit United Kingdom came only after his trek to Annapurna with a British sponsor in 1989. Then in 1997, he went to United States of America where he worked at a hospital serving Alzheimer patients for 15 years. During his work at the Hospital, he saw many Alzheimer patients who died in front of his eyes. He then realized that money was nothing after all everyone has to leave the world empty handed.
Ang Kami Sherpa has struggled throughout his childhood and want to make other people’s childhood memorable by helping the orphan and also helping the people in need. He likes taking photograph and one day want to open a NGO in future, if he finds a right person to work with. He thinks everyone in this world is more into money making then helping people from heart.
We Sherpa Sansar would like to thank on the behalf of whole Nepalese Community for saving people’s life and making their life better. Without any doubt, he should be nominated for upcoming CNN Hero.